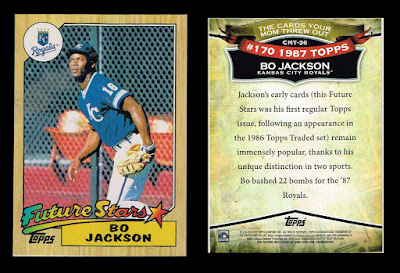 Type: Insert Card
Acquired: Bought Online
I have gushed about my love for Bo Jackson's 1987 Topps Future Stars card and when I first saw this card for sale online I was a little confused. After reading up a bit on this insert set from the 2010 Topps set, I thought this was a cool way to re-present these cards to a new generation! These cards came in two variations. One had the original backs from the cards and the second had a new back with info on some of Bo's earliest Topps baseball appearances. 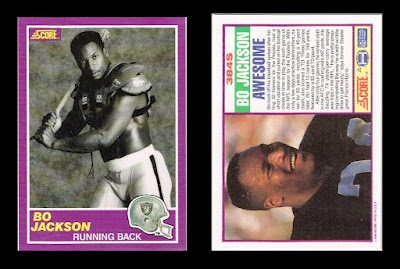 Type: Base Card
Acquired: Bought Online
This awesome looking base card comes to us via the 1989 Score Supplemental set. This 110 card set was an add on to the original 330 card base set and included such notable rookie cards of Sterling Sharpe, Eric Allen, Dave Meggett and Rodney Peete. To me this Bo Jackson card outshines them all! It is obviously from the same photo shoot that gave us the iconic 1990 Score #697 baseball card, but to be honest, I like this one better. It actually has info on the back and shows Bo in an action pose rather than just standing there with the bat over his shoulders. I like the color contrast on the front between the purple border and the black & white photo, also the shot on the back shows Bo having a great time on the gridiron and taking part in his hobby as an NFL running back!
Posted by Spyda-Man at 4:30 AM No comments: 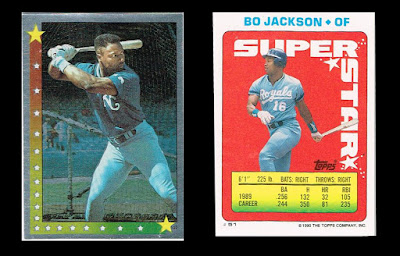 Type: Sticker
Acquired: Bought Online
I loved these sticker books back in the 80s and early 90s! My Dad would occasionally bring home packs of Topps stickers for me and my brother and we loved it! We never finished an entire book, but who did? That didn't stop us from drooling over the foil All-Star cards, collecting our favorite Mets players and trading away our doubles with friends. It really was a social event. When my daughter was pretty young, we tried filling a book. We never did, but I got to teach my daughter about the game and about some of the players. BTW her favorites were Ryan Braun and Albert Pujols. Love that I have this Bo card/sticker in my collection!
Posted by Spyda-Man at 4:30 AM No comments: 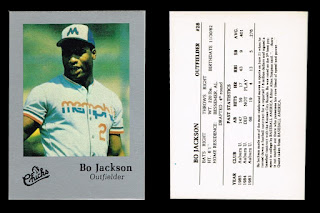 Type: Limited Set
Acquired: Bought Online
I really don't have a lot of info on this card it looks like it was part of a minor league team set for the Memphis Chicks that was released in 1986 by Time Out Sports. This is one of my favorite cards because it shows Bo off in his Chicks uniform right before he was called up by the Royals and became a superstar! I have another one of these cards with a gold border on it. I don't know how many of each cards was produced or why they offered color variants, but it is a very cool card with a nice layout.
Posted by Spyda-Man at 7:37 AM No comments: